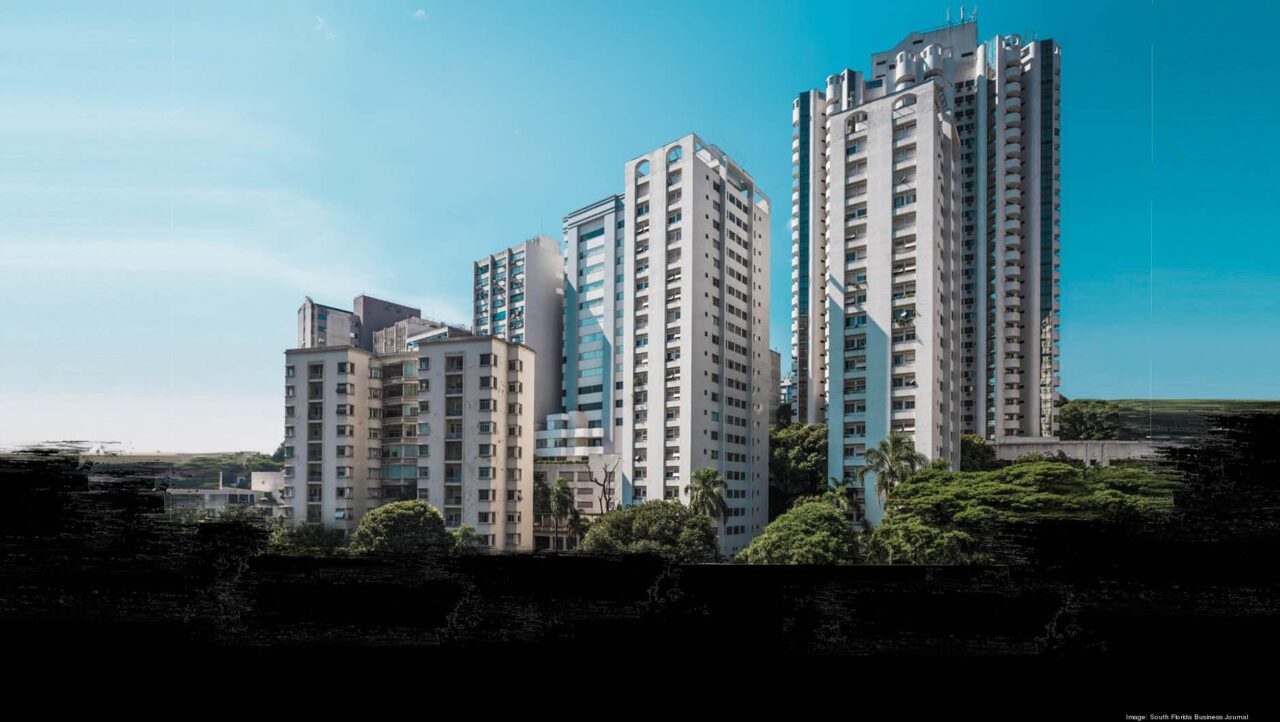 South Florida’s wealthy condo buyers are demanding more space, and this dramatic departure from past trends is shaking up projects across the region.

Buyers, mostly from high-tax states in the Northeast and California, have surpassed foreign purchasers as the primary source for condo sales during the Covid-19 pandemic. As people move down with their families, and often work from home, they increasingly seek more than one or two bedrooms. However, the local supply of three-bedroom condo units and apartments in new buildings is limited, as the prior trend was to build smaller units.

“We definitely had a shortage of larger inventory [condos] because, as Miami, Palm Beach and Broward have attracted more affluent people, there was more of a demand for luxurious, larger inventory,” said Alicia Cervera Lamadrid, managing partner of Miami-based Cervera Real Estate. “They are thinking of spending more time in Miami and moving here permanently.”

If developers are able to attract more of these high earners into their buildings, it could mean a big spending boost in the surrounding neighborhoods. Full-time residents tend to spend more time in town, and more money on services, than part-time international owners. Service businesses in many of South Florida’s biggest condo markets, downtowns and the beaches, have been hurt especially hard by the drop in customers during the pandemic, so attracting more families could provide them with a much-needed lift.

Condo developers also benefit as the once-sluggish condo market is now red hot, and they can charge significantly higher prices for the larger spaces.

When Miami-based Shoma Group broke ground on its Ten30 South Beach condominium in March 2020, the project was slated for 43 units, each with one or two bedrooms. Shoma CEO Masoud Shojaee found many buyers were people relocating from the Northeast and California seeking bigger units, so he started combining the spaces to create townhouses and penthouses. Three units were converted into a three-bedroom condo.

When the dust settles, Ten30 South Beach will have about 25 units, Shojaee said. The prices for a two- or three-bedroom penthouse are $1.4 million and $1.9 million, respectively.

“They want bigger spaces to create an office, a bar and a wine cooler,” he said. “It’s not so much the mentality of a second home here anymore. They are thinking of moving permanently. This will be a primary residence, so they want a bigger space to entertain their friends.”

Many people from the Northeast are used to condo living, but it’s impossible for working families to hold two Zoom calls in the same room, so the solution is more space, said Arden Karson, managing principal of Miami-based real estate consulting firm Karson & Co. Many developers are talking to her about larger units, or creating flexible spaces that are easy to expand.

“The way we developers are looking at projects is changing,” Karson said. “You can get premiums now for having more bedrooms. That’s both on the rental side, as well as the condo sales side.”

Buyers think bigger The strong demand from out-of-state buyers and the low inventory of single-family homes in South Florida is unprecedented, said C

CrossCountry Mortgage VP Matt Weaver, who works in Boca Raton and has been in the industry for 21 years. With so few single-family homes to choose from, buyers are increasingly looking to condos, but smaller units won’t cut it.

“It’s not simple to come down to Palm Beach or Broward and find condos that will support a family of four,” Weaver said. “Most were constructed for secondary residences. These developers weren’t forecasting a family of four with younger children coming down in this quantity.”

Three-bedroom condo units at Solemar in Pompano Beach are virtually flying off the shelves, while sales of two-bedroom condos are lagging, said Patrick Campbell, executive VP at the Related Group, which is developing the oceanfront project. The Covid-19 pandemic delayed the main sales launch to September, but the project is already 40% presold. In several cases, buyers combined neighboring units to create 4,000- to 5,000-square-foot condos.

“It’s usually the opposite of that because people try to get a home on the ocean for the lowest price possible,” Campbell said. “People are leaving big homes in other states and creating homes, instead of vacation places.”

When designing new condominiums in South Florida, the Related Group will use flexible floor plans so it’s easier to combine units, he added.

November through January have been the best sales months at Turnberry Ocean Residences in Sunny Isles Beach, primarily because of buyers from the winter-stricken Northeast, said Jim Cohen, president of Fontainebleau Development. The larger units in the recently completed tower are selling faster than the smaller ones, and they’ve even combined some units to create duplex-style condos.

A similar trend occurred at Fontainebleau Development’s SeaGlass Jupiter Island project, where the larger condos were the first to be presold, Cohen said.“In our SeaGlass project, in two recent sales, the clients came out of 20,000- or 30,000-square-foot homes,” he said. “They still demand a large space. They are just tired of upkeep for the home. They are downsizing, but still buying 6,000 to 8,000 square feet.”

Fontainebleau Development is strongly considering more luxury projects in South Florida, as the demand for larger units will continue and few projects are under construction now, Cohen added.

Coming out of the Great Recession, South Florida condo developers built smaller units priced at under $1 million to attract Latin American investors, who would mostly rent them out, Fortune International Group President and CEO Edgardo Defortuna said. That’s why there were few three-bedroom condos in that development cycle.

“All of a sudden, three- and four-bedroom units are in more demand,” Defortuna said. “The full-time resident, or at least a resident who will spend a significant amount of time here, will need more space. And they need more space because children might study at home, and the head of the household may need extra space for an office.”

Defortuna said he’s looked at increasing the sizes of condos in his future projects along the beach to accommodate people moving to South Florida. Projects with units that were previously 2,000 to 4,500 square feet are now about 4,400 to 5,000 square feet. He’s already combined some units at 57 Ocean in Miami Beach, which Fortune International represents, to create a four-bedroom “sky residences” – home-size condos on an upper floor.

“The numbers look better if you do that,” Defortuna said. “The price is more expensive per unit, but the total dollars are better [for the developer] on larger units than by dividing it into three.”

The only question Defortuna has before launching a condo with larger units is whether people primed to move here can wait three or four years for a project to be completed. Many are racing to hit the South Florida sand now.

When creating larger condos, developers don’t need to build huge amenity centers because residents already have space for hosting friends in their units, said John Farina, CEO of New Jersey-based U.S. Construction, which is building the Ocean Delray and 1625 Ocean boutique condo projects in Delray Beach. He focuses on a fitness center, spa and pool.

Beachfront condos aren’t necessarily competing with smaller condos, but with single-family homes in the same neighborhood. A 3,300-square-foot unit at Ocean Delray priced at about $5 million might sound expensive at first, but consider a relatively new oceanfront home in Delray Beach would cost well over $10 million.

“In certain markets, you really have a shortage of this type of product,” Farina said.

Group P6 Managing Partner Ignacio Diaz, who is building Royal Palm Residences in Boca Raton, said he wouldn’t build a condo unit smaller than 2,000 square feet in a luxury project because buyers want more space. Since the Covid-19 pandemic, interest in his project spiked and all the buyers intend to live there, he said.

In Aston Martin Residences in Miami, which Cervera Lamadrid represents, there has been more interest in larger units and some buyers have combined condos for more space as construction continues. While larger inventory is selling faster, there’s still a market in Miami for smaller units that are more affordable, she said.

“The new construction will either skew smaller than the typical two-bedroom units, or go larger,” Cervera Lamadrid said. “Developers are thinking of both bookends, but less in the middle.”

previous
Haute Living Miami Celebrates Blaise Matuidi Cover At 57 Ocean With Ulysse Nardin
next
Life at the Top: Four of Miami’s Most Surreal Spaces That Will Offer You Spacious Living and a Scenic Ocean View

Multiplan Real Estate Asset Management is a South Florida real estate developer with a focus on sustainability and mindfulness in both design and practice.